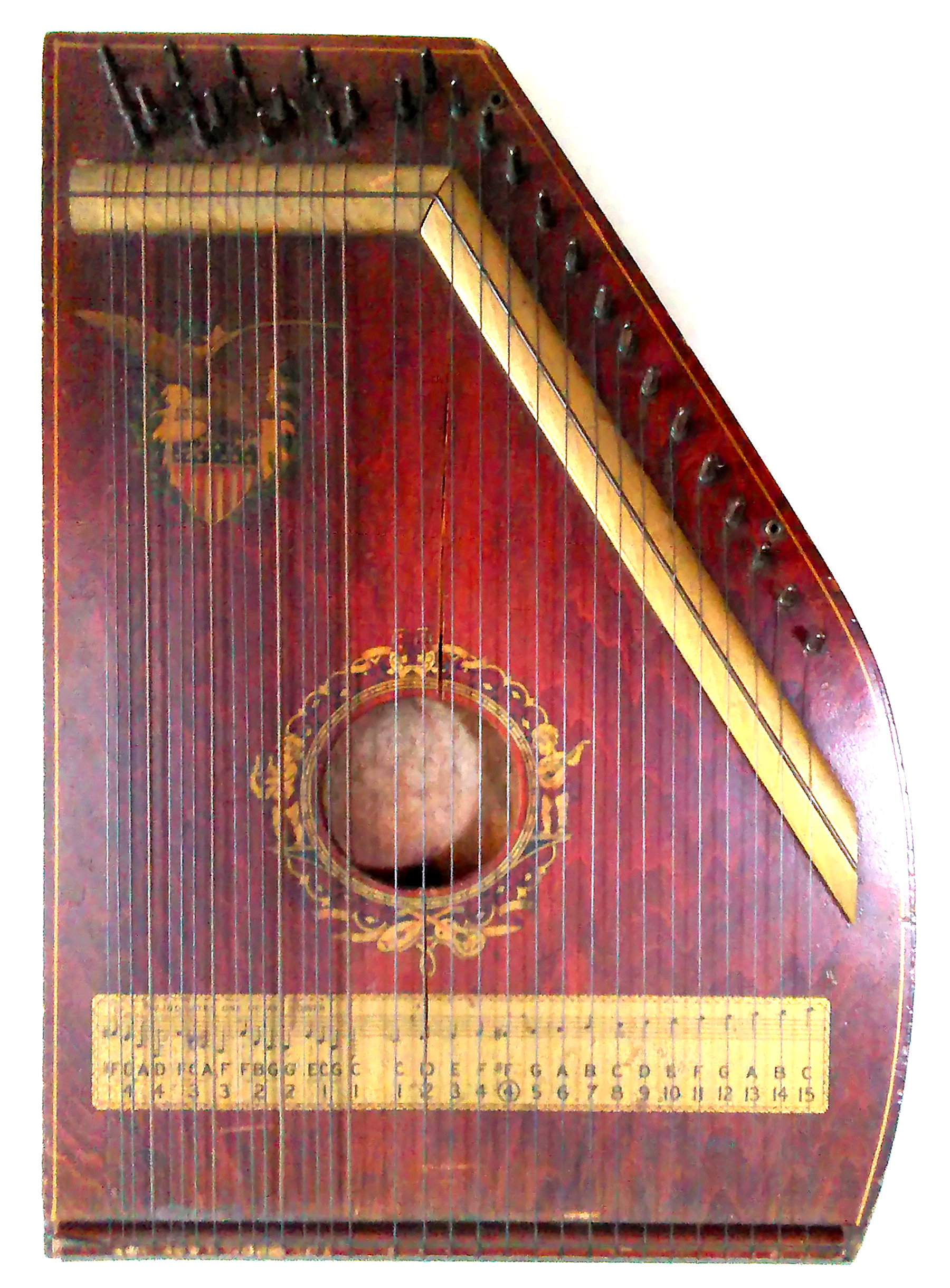 Let me introduce you to the zither that resides at the Boylston Historical Museum.  The zither is a class of musical instruments that takes on many forms and variations, but basically consists of a flat resonating box with numerous parallel strings stretched over its horizonal surface which are played with a plectrum or fingers. The fretted zither is composed of two main parts:  the chromatic fretboard, containing five strings (the Griffbrettsaiten), and a number of open strings ranging from 27 to 37; strings that are stretched over the full length of its soundboard, a resonating body.  The instrument, shown on the right is a 4-chord fretless zither composed of 32 metal strings stretched over a base made of mahogany and decorated with a gold eagle and musical scales.  It has four sets of four strings each group for playing chords as well as a bank of fifteen melody strings open-tuned to the C-scale.

The word ‘zither’ is a German rendering of the Greek word ‘cithara,’ from which the modern word ‘guitar’ was derived.  Historically, it has been applied to any instrument of the ‘cittern’ family, instruments that consist of many strings stretched across a thin flat body.  Zithers come in various shapes: triangles, trapezoids, long rectangles, and harps, but the most common shape is a rectangle with the top right corner removed by a diagonal cut.  Note that shape in the photograph of our artifact. Seen from the side, they are a relatively shallow hollow box, ranging from one to two inches thick with mechanical strength which is needed to withstand the tension of up to fifty strings. One can see the resemblance between guitars and zithers and numerous other instruments with similar descriptions; however, the zither lacks the neck.  A variety of these musical boxes go back centuries and are found across the globe.

The oldest known zither is the Chinese guqin, discovered in a 403 B.C. tomb in 1977.   Franz Wadecker was awarded several zither related patents in the United States beginning in 1881. The German inventor Karl August Gütter patented his "Volkszither" in 1882, however, that was the same year that German immigrant Charles F Zimmerman patented Gütter's design as the autoharp in Philadelphia, Pennsylvania, U.S.A. whose design led to the modern zithers.  In the late 18th century two principal varieties of zither developed in Europe:  the Salzburg zither, with a rounded side away from the player; and the Mittenwald zither, with both sides rounded.   Although the vintage zither in our collection is similar in shape to the Salzburg zither, it is clearly of United States origin.  It’s display of the Eagle on the American flag on its sounding board was the emblem used by the Chartola Company who made this design of zithers in the late 1800’s and early 1900’s in Jersey City, New Jersey.  The instrument in our collection measures. 18 ¼” length by 13” width by 1 ½” depth and has the serial number 7161 stamped on the reverse side.

While the zither is not commonly played or popular today, it was a favorite instrument of John Sebastian of the The Lovin Spoonfuls in the 1960’s and it was the sole instrument used to produce the musical theme of the 1949 British film “The Third Man.”   To listen to a zither being played, click on the photograph of the zither above and then click the center arrow to start the soundtrack.  That concert zither was played by Viennese musician Anton Karas and brought about a renewed interest and brief fame for the zither in the early 1950s; however, today most zithers found are merely kept as a mere decoration or unused and hiding in storage or in an attic.  The zither from Boylston’s collection is currently on display in the Historical Museum and we hope you will stop to view it when we are open once again.