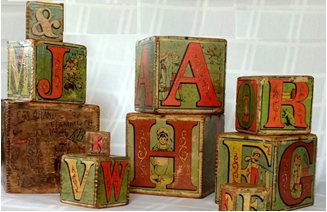 This set of vintage alphabet blocks in our Toy Collection consists of 10 five-sided boxes which can be nestled inside each other. These wooden carved blocks are covered with colorful lithographed paper illustrations of each letter.  The smallest block is a 1.5 inch square, with the letters H, I, J, K. One of the smaller blocks features an ampersand. The six larger blocks are decorated with children and animals corresponding with the letters: R depicting a rat, C a cat.  Several letters refer to nursery rhymes: J with “Jack and Jill went up a hill,” and the letter L with “Mary had a little lamb.” The largest block measures 6.5”square with the letters A, B, C on three sides. The fourth side has a picture of a girl who hands blocks to a boy stacking them.  These creative learning toys were made by The J.A. Crandall Company which was founded by the American inventor and toy maker Jesse Armour Crandall. He was issued several patents for rocking toys, alphabet blocks and construction toys. His design of nested wooden blocks was patented in June 1881.

f alphabet blocks first appeared in 1693 in philosopher John Locke’s essay Some Thoughts Concerning Education: “dice and play-things, with the letters on them to teach children the alphabet by playing.” In 1837 Friedrich Wilhelm Froebel, who pioneered kindergarten, introduced geometric blocks carved from wood. He believed in “self-activity” and play as essential factors in education. Froebel devised circles, spheres and other toys – all of which he referred to as “Froebel’s gifts”– designed to stimulate learning through play activities accompanied by songs and music. “In America, these toys found their way into schools in the 19th century, marketed as tools to help children recognize shapes of letters before learning to read.”

The Strong Museum in Rochester, New York inducted alphabet blocks into the National Toy Hall of Fame in 2003 recognizing alphabet blocks as a toy that has inspired creative play and one that enjoyed popularity over a sustained period!