The Honor Roll in this photograph was dedicated on September 19, 1919 to the forty residents of Boylston, Massachusetts who served in World War I. It was located at the base of the flagpole on the Boylston Town Common. The dedication of the honor roll was part of the “Welcome Home” celebrations for the veterans. According to the description by William O. Dupuis in History of Boylston 1886-1979 “All the homes and public buildings were festooned with red, white, and blue bunting and flags.”[1] The celebrations took place on the Boylston Town Common and began with a band concert by the Worcester Brigade Band, followed by 144 students singing ‘Keep the Home Fires Burning’ and ‘Victory’, and the invocation by Rev. George S. Dodge. The Honor Roll was unveiled and speeches were made by Major Joseph W. O’Connor, and Hon. Charles L. Burrill, Treasurer and Receiver-General of the Commonwealth. A hundred Boylston residents took part in the pageant “America, Yesterday, and Today”, and there was a baseball game between the Boylston Athletic Club and the Hilltop Athletic Club. A banquet in the Congregational Church, a band concert, and dancing in the Town Hall (Historic Town Hall nead the Town Common) with Chafflin’s Orchestra concluded the festivities. The band concert on the Boylston Common was “illuminated with electric lights and ‘red fire’ (fireworks display featuring the American Flag)”. [2]

The tradition to pay tribute to all veterans who are serving and have served in the United States Armed Forces dates back to the end of the First World War.  On the eleventh hour of the eleventh day of the eleventh month in 1918, Germany signed an Armistice with Great Britain, France and the United States. The United States designated November 11 as Armistice Day on the first anniversary of the end of the First World War, November 11, 1919. In 1926, Congress passed a resolution for an annual observance, and November 11 became a national holiday in 1938. President Dwight D. Eisenhower officially changed the name of the holiday from Armistice Day to Veterans Day in 1954. [3] 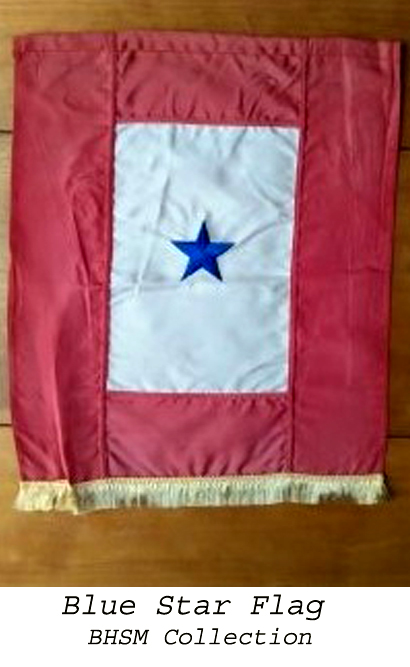 The Blue Star Flag in the photograph was donated by Clara Kelley Fellows to the Boylston Historical Society and Museum.  Her husband, John White Fellows, served as 1st Lt. in the United Ste Marine Corps during World War II.

The Service Flag was designed and patented in 1917 by U.S. Army Captain Robert L. Queisser of the 5th Ohio Infantry, who had two sons serving on the front line. The Service Flag, also known as the Blue Star Flag, became an unofficial symbol of having a child serving in the army during WWI. In 1918, President Wilson approved the suggestion made by the Women’s Committee of the Counsel of National Defenses that mothers who had lost a child serving in the war wear a gold gilt star on the traditional black mourning arm band. This led to the tradition of covering the blue star on the service flag with a gold star to indicate that the service member was killed in action or died in service.

The practice of displaying the Service Flag became more widespread during WWII. One of the most memorable service flags was that of the five Sullivan brothers who all perished on the U.S.S. Juneau on November 13th, 1942. In 1966, the Department of Defense revised the specification for the design, manufacture and display of the Service Flag.

“The Service flag is an official banner authorized by the Department of Defense for display by families who have members serving in the Armed Forces during any period of war or hostilities the United States may be engaged in for the duration of such hostilities.”[4]

“Erected by the people of Boylston in memory of those who have served our country in war”.

It is a large monument made of Barre granite and stands at the top of the highest point of the Boylston Town Common. It is one of four war memorials in Boylston, Massachusetts. For additional information, see article “Boylston Memorials” written by Judy Haynes.