Home » Artifacts from History » Friday's Fascinating Finds » Something About Maps

Last fall, invited by the Boylston Historical Museum, I set out to create a map of the town that would complement the Hastings Family of Boylston exhibit. It was the intention to locate as many of the family homes as we had information for.  This required a good perusal of the Museum’s map collection, where several maps were found to use as source material. These included the Map of Boylston, published by Fredrick W. Beers in 1870; an 1897 map produced by the Massachusetts Water Supply Commission defining properties to be taken by eminent domain for the flooding of the Wachusett Reservoir; the Historic Boylston map which is included in the 2012 edition of the Boylston Historical Series. Several map sources from outside the collection were also used, the Map of Boylston published by Henry F. Walling in 1856, several editions of the USGS maps for the area and of course the ubiquitous Google maps. 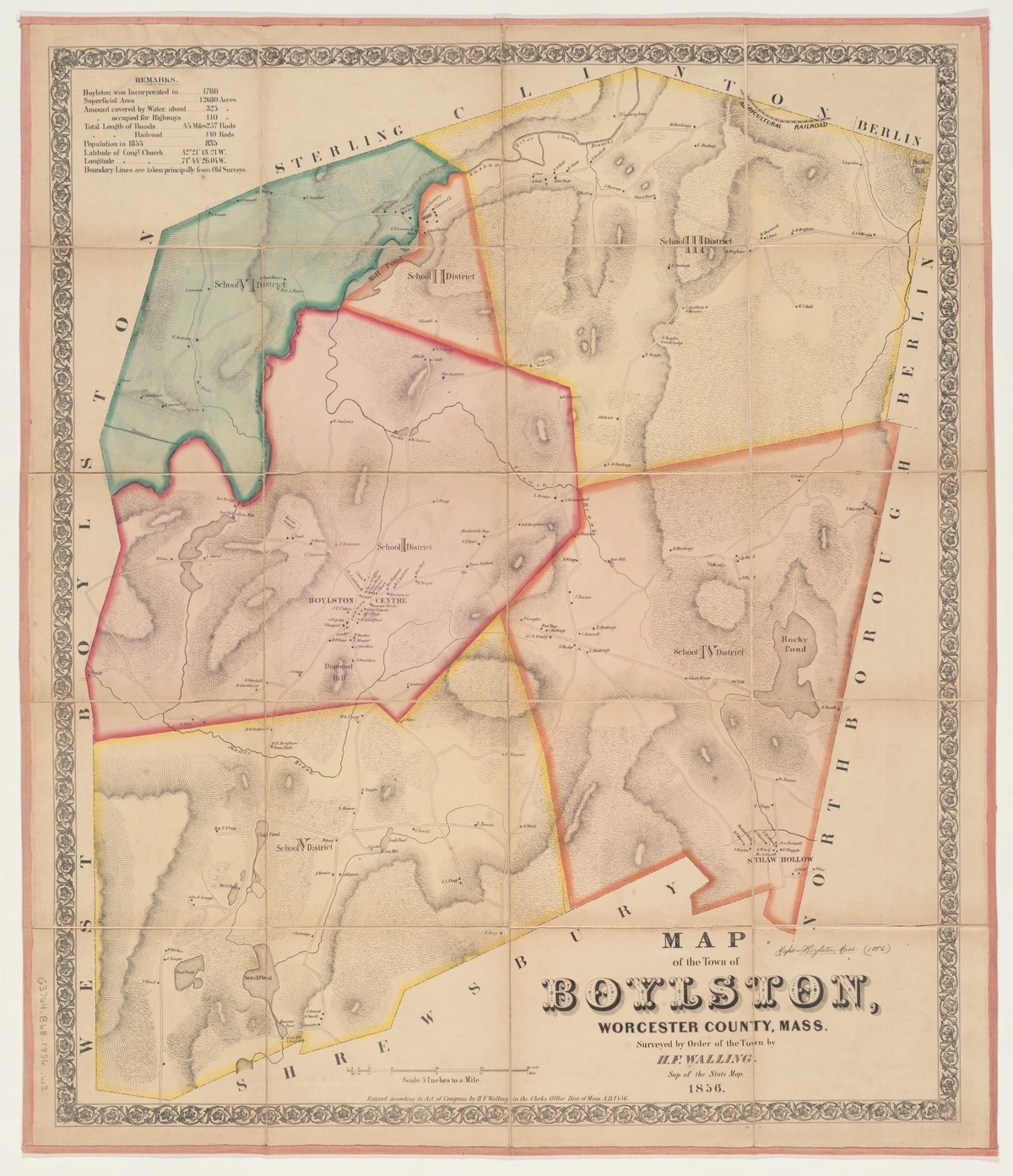 These maps all have interesting histories of their own, a few of which I will outline in a series of articles. I will start with the H. F. Walling and the F W Beers maps which have similar stories. They were both produced in the 1800’s by commercial map makers. In other words, the maps were produced for sale to the public and often included advertising in the form of business listings. Both mapmakers relied on their own surveying for the data. And both were notable cartographers of their time.

H. F. Walling, (1825-1889) began his career in Providence RI as a civil engineer with the Samuel Barrett Cushing firm, but he soon branched out on his own to create a series of town plans, first focusing on Bristol County, RI. Eventually he spread out to areas of Massachusetts, including Worcester County, and ultimately completed as many as 50 town plans and several state atlases. He ended his career with the newly formed United States Geologic Survey where he served until his death in 1889. Walling’s town plans are beautiful maps. The one shown on the left outlines the six Boylston School Districts that existed from about 1850 until 1867 and were the result of the new School District System adopted in Massachusetts at that time to replace the old Town System.

The 1870 map by F.W. Beers (1839-1933), while perhaps less beautiful, did provide a great deal of information including roads, businesses and homes. It provides a listing of businesses and a detailed section for the center of town. Beers was an influential surveyor and cartographer in his own right, who began his work with the publication of the 1867 Atlas of New York City and Vicinity. From 1865-1900, he and his family of collaborators published atlases for as many as 80 counties, including Worcester, and 10 northeastern states. Beers increased his reputation with the authoring of the Geologic Survey of New Jersey and the Atlas of the Oil Region of Pennsylvania, which became important sources of information for the fledgling oil industry. He lived in Brooklyn, NY and worked for the Brooklyn Office of Public Records until he retired at the impressive age of 90.

The third map of interest is a section of one produced in 1897 by the Metropolitan Water District in Boston.  In order to supply Boston and surrounding towns with water, six and ½ square miles of Boylston, West Boylston, Clinton and Sterling were due to be flooded resulting from the impoundment of the Nashua River by the construction of the Wachusett Dam in Clinton. As it turned out, quite a few of the Hastings family, among other prominent Boylston residents, were to lose their properties by eminent domain. The MWD “Takings” map outlined just which properties these would be. The boundary outlined in blue represents the area to be flooded by the reservoir and the yellow indicates the Hastings property being taken. This section of the map shows the Eleventh (1898) and Twenty Third (1900) Takings.

The flooding of the Wachusett Reservoir dramatically changed the map of Boylston forever making it particularly interesting to compare the maps from before and after. In making these comparisons, a handful of interesting stories have come to our attention.  It is the plan to outline some of those stories in articles to come. So, stay tuned.