Boylston is the home of the John Bartholomew Gough estate which includes the Italian architecturally styled twenty room mansion he had built in 1848 for him and his wife, Mary Whitcomb Gough. 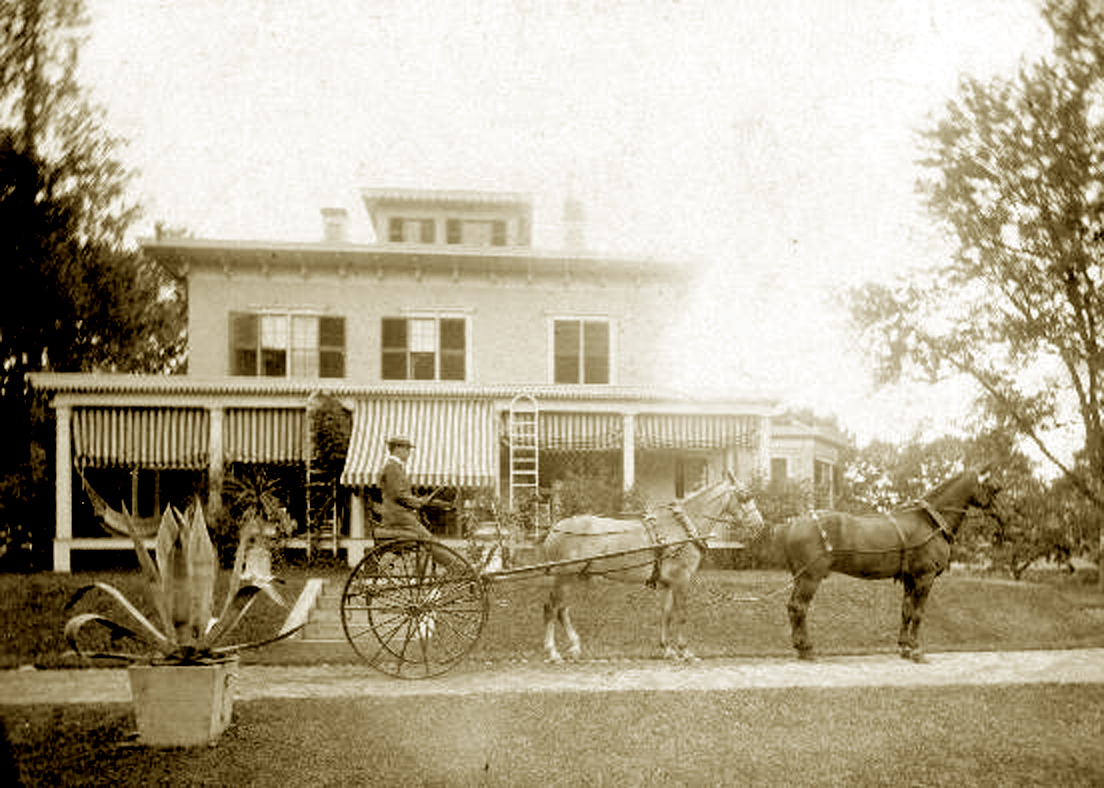 John became a much-desired orator in the Temperance Movement in the nineteenth century, as he had struggled with his own bout of alcoholism. Possessing a flair for the dramatic, he was able to educate while entertaining the audience regarding the evils of alcoholism as he was a good singer and a natural showman who could tell his story.   The Boylston Historical Society & Museum is fortunate to have Gough objects in its collection, one of which is the Gough family samovar. 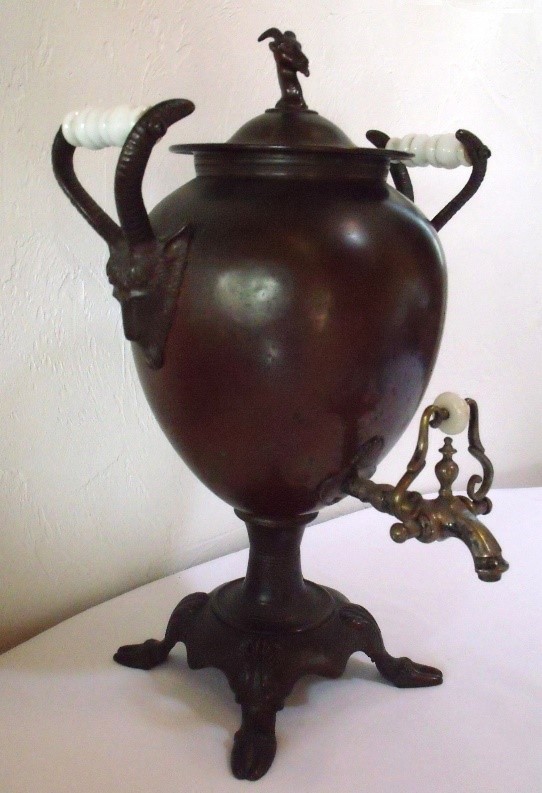 The samovar, literally meaning ‘self-brewer’ originated in Russia and is a vessel, made of metal that was used to heat and boil water for tea.  Within the body, there is a center tube running vertically through the samovar where one would put lighted fuel – perhaps coal, charcoal, or even pinecones to create a fire.[1]  One might keep it smoldering so it could be quickly rekindled with a kind of bellows designed for this purpose. However, the Russians would consider it an abomination to serve water that was heated longer than 15 minutes for tea.  The charcoal is usually started in the range and put into the samovar tube.  The space around the tube is filled with cold water and within minutes the water begins to boil.   The tea itself is prepared by pouring the water over a small box filled with tea which is then brewed in an earthen teapot.[2]

The antique copper samovar has a lid with a finely detailed satyr finial, two elaborate white opaline handles with satyr mask escutcheons, and “pied-de-biche” feet; as well as a brass spigot with a white opaline glass button.  It measures 18 ½” in height to the tip/top of the lid and has a 25-inch diameter at the widest point of the urn body.  The samovar in our collection was manufactured by R. & J. Slack, 336 Strand, London in 1850.

The samovar may have had ancient roots, as vessels made for tea were found or depicted in ancient Greek homes, but the first documented and registered samovar-makers were the Russian Lisitsyn brothers, Ivan and Nazar Fyodorovich in Tula, Russia in 1778.[3]  They made their first one out of brass.  Their designs came in various metal shapes and styles and even some beautiful ceramic samovars were made.  Perhaps the tea maker was not invented by Russians, but they were thought to have influenced those found and made all over Europe and Asia since the 18th Century.[4] The Russians had an expression: come “sit by the samovar” which meant please come and enjoy a leisurely visit and talk while drinking tea.

The samovar in the BHSM collection looks like what we think of as a traditional Russian style samovar with its brass feet and copper urn body.  An object that was so prevalent in homes for tea, now is a rare sight.  We hope you will stop by when we are open so you can examine this wonderful piece of history that is currently on display in our Boylston Historical Society Museum.  It will put a new meaning to the invitation “let’s sit and have a cup of tea.”