George Lawson Wright was a Town Clerk for the Town of Boylston for many years. George, the son of John Moody Wright, a shoemaker of Shrewsbury, Massachusetts and Achsah Barrows of Mendon, Massachusetts, was born on 24 December 1856 at Boylston, Worcester County, Massachusetts, as recorded by Henry H. Brigham, town clerk of Boylston, Massachusetts.  The yearly summary of births by years, lists his birth to be 31 December 1856 and has his mother's place of birth as Wrentham, Massachusetts.  George died on 15 April 1943 at Boylston and was the town's first historian.  Wright was a teacher in local schools and was a surveyor by profession.  He was self-taught in state law, history, geology, art, and calligraphy.  He also stood as the longest serving member of the school committee - serving for 30 years from 1884 to 1912.  He was a selectman, town moderator, and among many other things was a librarian for the Social Library.  Finally, Wright proudly held the position of justice of the peace for 60 years.

His accomplishments are many and varied. He designed the original town seal.  He was an avid historian.  We owe so much to his writings about genealogy, history, deeds, and plot plans.  It was said that when his house was burning down the firefighters grabbed as many of his papers as they could save.  He had so many records and writings in his attic that it was said paper ash rained down. One can only imagine the history that was lost that day. 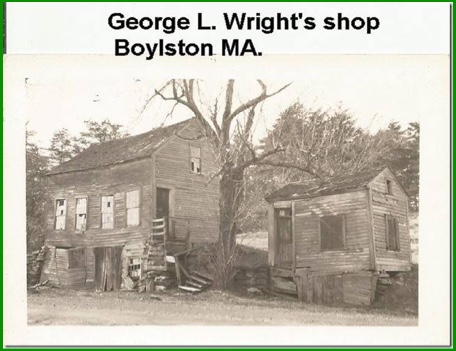