One of the oldest artifacts in the Historical Society and Museum collection is an English backsword, which was acquired by long-time and now deceased historian, William O. Dupuis. The backsword was authenticated by experts at Higgins Armory as a circa 1630 weapon and a weapon similar to those used in the English Civil Wars (1642-1651), the war between Parliamentarians (Roundheads) and the Royalists (Cavaliers).[1]

“A sword is defined as an edged weapon with a long blade designed for delivering cutting blows or thrusts or both.  It first appeared during the prehistoric period.”[2]   The earliest swords may have been made of bone or stone.  Bronze and iron likely came next as metals for producing such weapons, but once copper was mastered, it helped to make a longer sword blade possible.  Today it would be fashioned from steel, an alloy of iron and carbon.  Over the centuries, swords came in various sizes and lengths.  Some were as tall or long as a person.  It is thought that the earliest swords known were from 3,300 BC and one found in Turkey was 60 cm (24 inches) long and made of bronze.  Historically, a sword was worn in a sheath called a scabbard which was typically suspended at the waist from a sword belt worn diagonally across the chest or shoulder belt with the scabbard worn across the back.  Albeit rarely some very short swords were worn across the back and for a theatrical effect.  Hollywood often portrays the medium and long swords as being donned on one’s back, but in an actual combat ready situation, one’s sword would have been carried in the hand, in a sword belt, or sheathed in the saddle of one’s horse, or in the case of very long swords in a cart.[3]    Sword classification has changed over time.  The arming sword, broadsword, and long sword are often terms used to describe similar swords of different historical periods.  The most common typology was done by hilt type, handedness (single or two handed) or classifications by blade type.  The blades were usually classified as double-edged and straight sword, edgeless and thrusting swords or single-edge and curved swords.  Double edged swords with a basket hilt are classified as broadswords or cutlasses.

Backswords, however, were single edged military weapons used from 16th to 18th century throughout Britain and Europe.  The backsword had a single-edge straight blade and a hilt with a single-handed grip.  It is so called because the triangular cross section of the blade gives a flat back edge opposite the curved cutting edge which tapers to a sharp point.[4]   The sword’s hilt is its handle and consists of a guard, a grip and a pommel.  A single edged sword was easier to make, cheaper and the more favorable edge made a much more acute cut.[5] 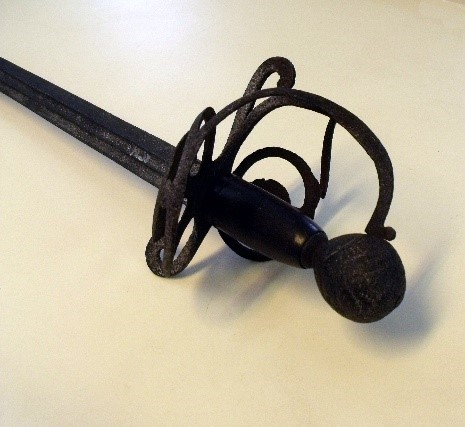 The backsword in the Boylston Historical Society & Museum collection has a grip of wood; its smoothness indicates it may have previously been covered with leather.  Authentication of the backsword indicated the grip was replaced at one time as it shows evidence of once being in a fire.  It has a rather elaborate hilt and protective hand guard or brake of iron and designed in a fancy round basket shape called a ‘basket hilted’ grip.  The full length from pommel to the blade tip is 40 inches overall.  The blade alone is 34 inches long would be considered medium length. This English backsword enjoyed a bit of fame when it was placed on display at Plymouth Plantation in Plymouth, Massachusetts from the years 2004 to 2006.

The word “Sword” is closest to the Scandinavian Svard or Suerd.  The word became a generic name for this type of weapon.[6]  Swords were not only weapons, but could serve practical uses such as cutting through foliage or tall plants in the New World.  It is thought that the Pilgrims used them not only in wars but to hack through brush and difficult growth, but also to carve or cut up and prepare an animal for food.[7]

In the United States swords were commonplace on the battlefield in the Revolutionary and Civil Wars.  It was after World War I that they were stopped being issued with the Patton cavalry saber, the last sword issued to U.S. military personnel in 1918.[8]  Today military swords are primarily used in military training of officers and in honorary ceremonies or as part of the military dress uniform.[9]

The Boylston Historical Society & Museum has in its Military Weapons Collection a variety of swords and sabers dating from this rare seventeenth century specimen through the 20th century types.  Visitors to the museum, both young and not so young, always enjoy exploring this gem of a collection.  Tours will soon be available.  Watch www.boylstonhistory.org for opening details.