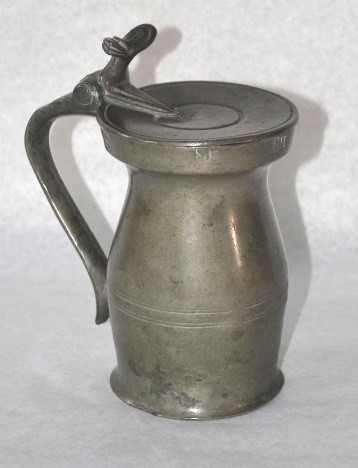 In our collection there is an attractive pewter tankard dating back to the early 1800’s.  It is 6 2/3’’ high, 4” in diameter, and weighs two pounds.  On the cup are the engraved initials ‘SH’ for Silas Hastings who was the proprietor of The Hastings Tavern and Inn, a federal style brick building he had built from the bricks of the John Howe brickyard of Boylston.  Licensed in 1818, Silas operated the tavern in Boylston Center until his death in 1833, when his son-in-law took over and ran it until 1839.

The American Heritage College Dictionary describes a tankard as a “large drinking cup having a single handle and often a hinged cover.”  One could compare it to a stein or a mug.  Pewter is lasting, less expensive than silver, yet still considered a good choice for a drinking cup by “discerning drinkers since the Middle Ages.”  Pewter is malleable, and was then made of tin and lead and had been around since the Bronze Age with artifacts of pewter even found in Egyptian tombs.  It didn’t tarnish easily, thus making less work for servants who once had to polish the silver in eating and drinking establishments.  The hinged cover had its advantages also.  If a hot drink was served, it cooled more slowly, and if a cold drink was within, it would stay cold longer.  The cover would also have kept out any flying insects or dust that may have been present.  Pewter tankards could have been made either by casting in a mould, by sheet-working and then joined, or by spinning, a traditional method, but one that requires a skilled craftsman and was often used for more elegant products with fancy designs.  The vintage Hastings tankard was crafted using the sheet-metal technique with a double horizontal band around the widest part of the drinking vessel.

Pewter tankards can vary in size, but the most popular was a ’pint’ or a ‘quart’ size.  It is said that when the bartender reminded his customers to watch how much they were drinking, he would say “Mind your P’s and Q’s” – thus the origin of the phrase, it is believed, and one we may still use today, but with a broader meaning.

The tankard now in our collection remained in the Hastings family and was even passed down one time as a wedding present.  The initials SH appears to indicate this was Silas Hastings personal cup. Regulars often kept their own mugs at their favorite drinking establishment.  Silas was active in various town offices holding positions as Boylston selectman and treasurer.  Town politics were likely discussed over a cup of grog or other beverage at the inn, as that was a usual practice.

Grog was one of the common drinks served since Colonial times.  A tankard of grog consisted of ½ a lemon, a lemon slice, 3 cloves, 1 lump of sugar, a strip of orange rind, and 2 ounces of rum.  Fill the tankard with boiling water and stir with a stick of cinnamon.  This would have been a welcome drink on any cold November or winter day.  Let’s lift a cup of something warm and offer a toast of positivity as we enter what could be a very cold winter!