The beautiful stones in our Boylston Historical Society 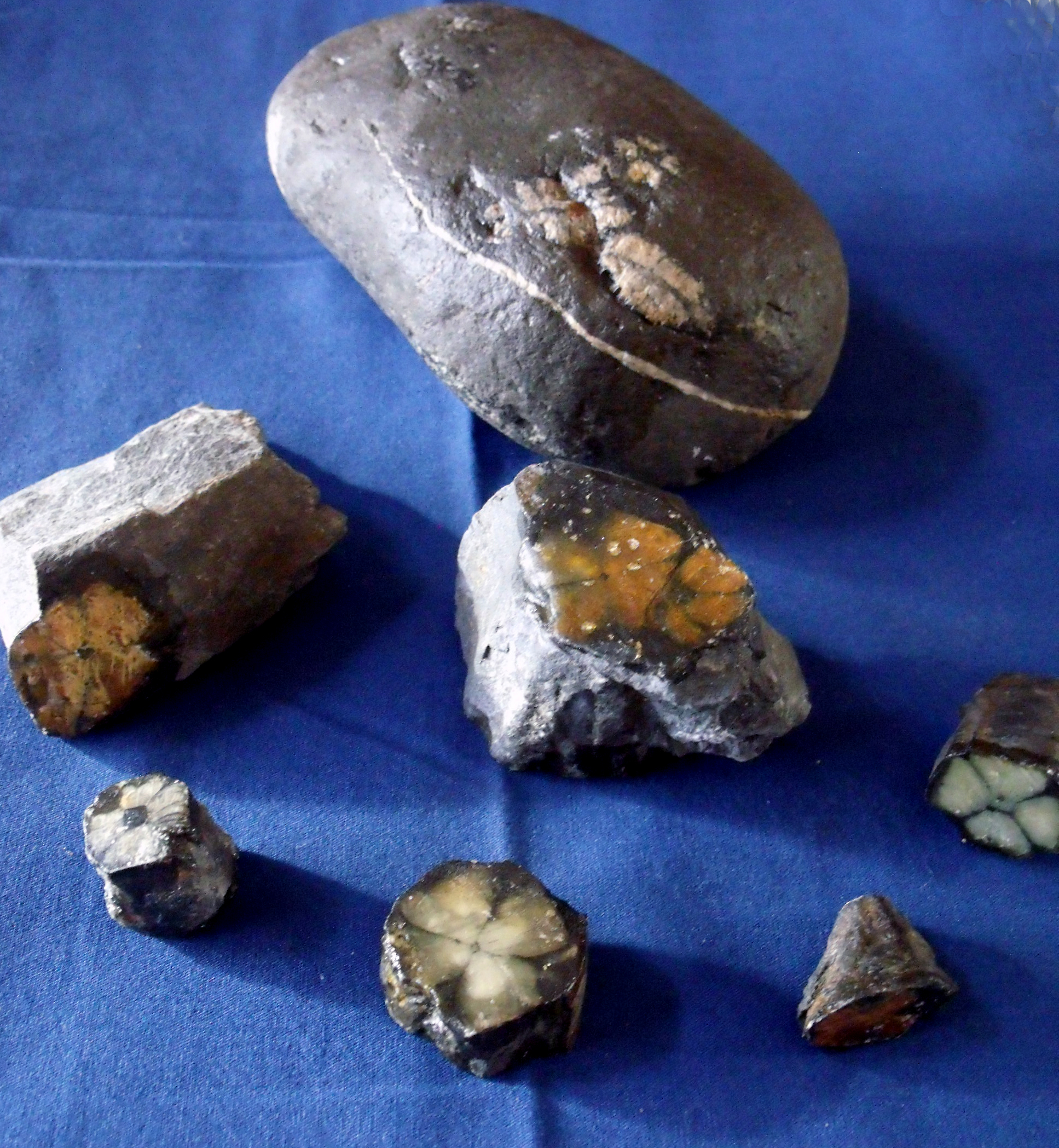 & Museum collection were discovered near the Wachusett Reservoir.  This rare form of andalusite is known as a Chiastolite (Al2SiO5) an aluminum nesosilicate mineral with cross shaped inclusions of black graphite and carbon.  The chiastolite is a very rare variety of andalusite that was formed by a process called metamorphism, when high temperature and pressure formed the rock resulting in the interesting design. The stone must be broken open for a viewer to be treated to an image of a cross or a four-petaled flower.  This special and beautiful mineral was first mentioned in a 1648 book titled “De Gemmis et Lapidibus,” but was not officially recorded until 1754 by Jose’ Torrubia, Spanish born paleontologist.  It came to be known as the ‘cross stone,’ as the word chiastolite comes from the Greek ‘chiastos,’ meaning arranged crosswise or diagonally in a pattern that resembled the Greek letter Chi, written as an X.

It is noted that there are only three active localities in the world with Lancaster and Sterling in Central Massachusetts as one of those three active sites, so we have a rare find.  Asturias, Spain and the Bimbowrie Conservation Park in Olary Province, South Australia, are the other active locales.  Chiastolites may be found in other places, but are not actively mined

In the earliest colonial days Boylston, Massachusetts was part of the Lancaster Land Grant.  This geographical area is on the Clinton-Newbury fault line, and is the kind of landscape where chiastolites are found as the metamorphism of shale occurs in a vicinity where tectonic plates come together.  When those early settlers near today’s Lancaster were looking for iron ore, silver, and gold, they were fascinated by a stone that when split open displayed a cross; thus, they assumed it might hold special qualities.  Samples were shipped to England for the Royals to see, and they supposedly were captivated by them.  Mines were opened in Lancaster and neighboring Sterling so they might be extracted and sent to England and to Europe where many are still displayed in museums.

Though attractive to look at, they were dull, earthy crystals and not hard enough to be suitable as a true gem.  It was the pattern, primarily, that leant its value and symbolism; thus, it was favored as an amulet, charm, and talisman.  Many were found by archaeologists when digging in Native American (Nashaway) sites of this area.  Those excavated stones were found to have been polished, leading one to believe they held special meaning to the Nashaway people.  One historian wrote that Native Americans believed heavily in the protective aspects this mineral provided and would have this stone talisman with them to ward off negative vibrations during rituals and ceremonies, but none of this has been verified by anthropologists studying the Nashaway.  However, they were considered valuable and important enough to be traded with other tribes.  Believers in crystals feel a chiastolite provides positive energy, mental clarity, inner peace, and connects their energies to that of Mother Earth.  Some believed the stone bestowed strength, power, perseverance, and was extremely calming when held in one’s hands.

Even into the 1980s there were people in the Lancaster, Massachusetts area looking for ‘cross stones.’  One person related that her mother found two in a stone wall near Blood Forest, Lancaster.  She found round lumps in the rock and used a rock chisel to open and to expose the special symbol.  The daughter noted “Sometimes beautiful things can be hiding in plain sight.” She no longer has the stones, but wishes she had this special memory of her mother’s and their forays to look for chiastolite stones.

When COVID-19 is history and we are once again open, come to the Boylston Historical Society and Museum and witness these rare stones first hand.