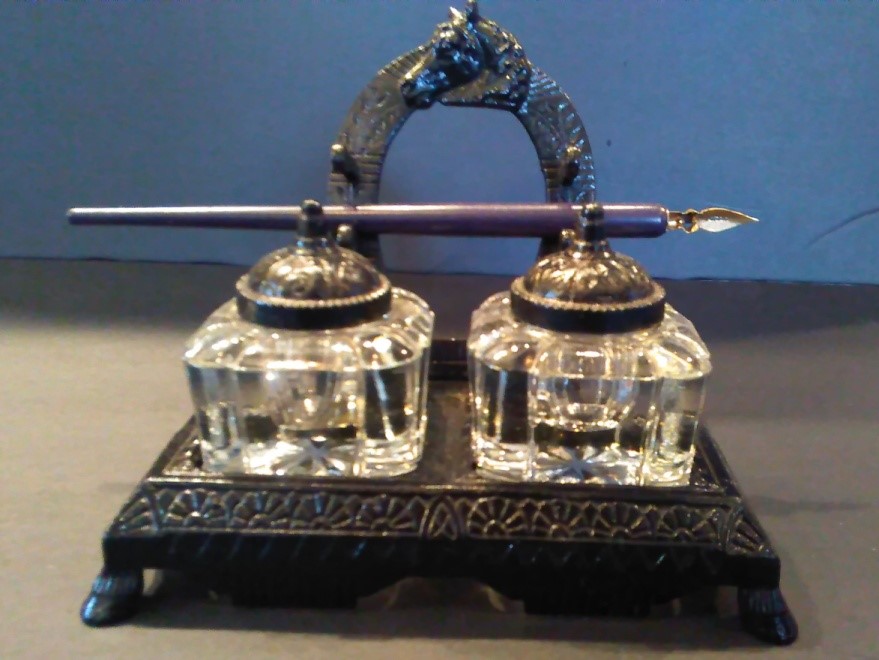 que Victorian inkwell stand with two covered inkwells belonged to Reverend George S. Dodge who was the pastor of the Congregational Church in Boylston from 1902 to 1917. The decorative inkwell stand is made of cast iron, as are the covers of the two glass inkwells. The back of the stand has a Western horseshoe design decorated with a horse head and a spot to rest your writing instrument. It measures about 6x3x5 inches. It was made by the Peck Stow & Wilcox Company.

The Peck Stow & Wilcox Company dates back to 1797. Seth Peck of Southington, Connecticut started to manufacture tools and machines to replace the hand tools used by tinsmiths. Several firms succeeded the business and by 1870 the S. Stow Mfg. Co. of Plantsville, Connecticut and the Roys & Wilcox Co. of East Berlin, Connecticut were competitors. In December 1870 these two firms and the Peck, Smith Co. united and established a joint stock company named the Peck, Stow & Wilcox Company. In 1881 the Wilcox, Treadway & Co. of Cleveland, Ohio was acquired by the company. Tinsmiths’ tools and machines were the main products, but other items such as tools for carpenters, machinists and blacksmiths, and a variety of housekeeping products were also made. The company was bought out by Billings & Spencer in 1950.

Inkwells made out of stone with round hollows date back to Ancient Egypt. Different materials such as glass, porcelain, animal horns, pewter, silver and other metals would later be used. From the seventeenth century onwards, inkwells became more elaborate and decorative as more people around the world began to use them. Especially in Victorian times many ornate inkwell stands were produced.

The primary writing instrument for over two centuries in America was the quill pen. It was functional and inexpensive and continued to be used long after other writing instruments were introduced in the nineteenth century. The word pen comes from the Latin penna meaning feather. Its form was the basis for the steel and gold pens that replaced the quill pen. Samuel Harrison, a manufacturer from Birmingham, England developed the first modern steel pen in 1780. The pen point and the shaft were part of a single unit which became known as the barrel pen. They were made of sheet steel that was rolled into a tube. These pens were expensive because they were manufactured by hand and needed to be replaced when the point wore out. In 1809 the English inventor Joseph Bramah patented a machine to cut a single feather into a series of quill points or nibs, which could be inserted into a reusable pen holder. This idea was applied to the steel pen over the next decades. In 1830 Joseph Gillott, from Birmingham, England, developed a mechanized stamping press for steel pens, and obtained the U.S. patent for manufacturing metallic pens in 1838. He also improved the pen’s flexibility by adding a hole at the base of the point’s central slit, and slits on each of the point’s sides.1

The standard ink used with these pens was iron gall ink, a purple-black or brown-black ink made of iron salts and tannic acids derived from vegetable sources. Its use dates back to the fourth century in Europe, became widespread around the world and is still sold today. With the development of a practical typewriter in 1868, and a functional and reliable fountain pen patented by L.E. Waterman in 1884, the demand for inkwell stands fell sharply.