Once a part of domestic daily life, the making of butter has become a rarity.  The American pioneer woman was known to simply pour sweet cream into a butter churn and then after some turns of a handle or the moving up and down of a paddle, voila, there would be butter.  Prior to this endeavor, the cows were milked; the milk would be set for a half day in shallow dishes so the milk and cream would separate with the cream rising to the top.  Once risen, the cream would be skimmed off and the churning process could begin.  The typical butter churn used was a plunger-type in a wooden barrel, whereby the butter making action is created by moving the plunger in a vertical motion

up and down.[1] Churns were also found in other shapes and forms.  The most comm 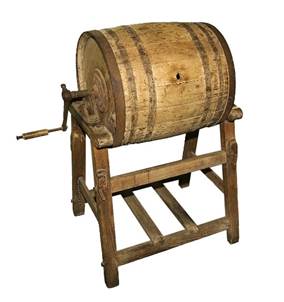 on types were the dasher, crock, plunger or dazey, but even steel churns not bigger than a large bottle were utilized.  A sample of these steel churns can be seen in the Cork Butter Museum in Ireland.[2]  Churns made from wood were in a barrel shape, with a handle for turning; the whole barrel and apparatus was attached to a standing platform and was designed to be cranked in either a vertical or horizontal rotation.[3]  Agitation of the cream as the barrel is rotated is enough to cause the cream to come together and form delicious buttery globs. 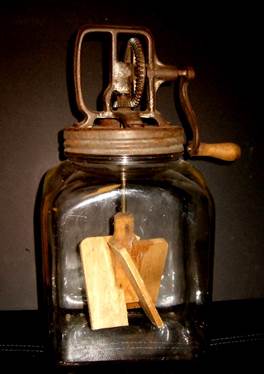 In its collection, the Boylston Historical Society & Museum has a dazey churn.  This is a paddle type hand-cranked butter churn attached to a 6-quart glass jar.  The turning crank sits on the lid and is turned by hand so that the wooden paddle agitates the cream quickly, breaking the cream up by mixing it with air, allowing for a faster agitation and formation of the buttery spread.  One advantage of a glass jar would be to enable the person to see the product as it takes shape.  This size was small enough for use by a family, but not large enough for producing many quantities of butter for sale by a large dairy.  Cyndi Rup, donor of this dazey style churn, tried it and found hand turning it was very hard work and one she did not wish to repeat as it seriously hurt her shoulder.  Women for centuries have had to endure this strenuous work, so songs were created to sing while churning. One such song that described the task at hand was created by Silas Dinsmore of Texas.[4]

APRON on and dash in hand,

O’er the old church her I stand-

How the thick cream spurts and flies

Now on shoes, and now in eyes!-

Ah, how soon I tired get!

But the butter lingers yet:-

Aching back and weary arm

Quite rob churning of its charm!-

And the churn rings sharp and clear,-

Arms that have to flag begun,

Work on: you will soon be done:-

Sweetest music to the ear;

For it says the butter is here!-

The butter churn was known to have existed as early as the Beersheba culture in Israel which would place it in the late Chalcolithic period around 6500-5000 BC.[5]  It is believed that it was accidentally discovered as nomads were carrying milk in sacks attached to their pack animals finding that the motion as they travelled caused the milk to turn to butter.  Churning devices existed and were found in Europe in the 6th century, particularly the barrel churn as previously described.  One novel invention by Alfred Clark was the rocking chair butter churn, which consisted of a barrel attached to a rocking chair.  When “the chair moved, the barrel moved with it and churned the milk within into butter.”[6]

The churn used in the home is of a European style originating in the 6th century A.D.[7]  A very clever Albert Richardson patented a butter churn on February 17, 1891 that would improve on the dasher/plunger style by adding gears and a handle to a wheel above the wooden base.  It could turn the milk fat and oils more quickly and easily into butter than previous hand-held vessels requiring constant on and off stirring of cream in a bowl.[8]  “From the mid-1800s through the 1940s, the hand crank butter churn was the most commonly used household butter churn in America.”[9] These glass crank style devices usually replaced the more simplistic wooden dash churns.  Not long after the invention of electric churns, commercial butter production became more widespread.  Since churning was considered women’s work and part of the household chores, purchasing it ready-made was welcomed by the modern housewife.

Boylston had a thriving dairy business in the 19th century as evidenced by The Massachusetts Censuses of Fisheries, Commerce, and Agriculture.  The information gleaned from 1845, 1875, 1895, and 1905 indicated Boylston farmers produced:

42,227 lbs. of butter and 11,500 lbs. of cheese in 1845.  Dairy and butter making were the second largest quantity of products being made in Boylston in these early years.

But change began at the end of the century as butter production dropped from 36,000 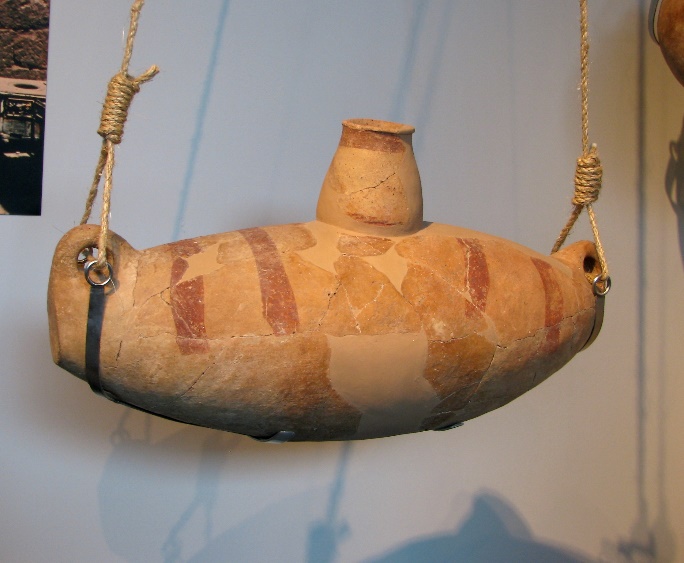 + 20 years prior to barely 5,000 lbs.; however, dairy products were still 40% of Boylston's agricultural products in 1895.  They remained valuable and important commodities in Boylston's farm community.  By 1905 however, only 950 lbs. of butter and 800 quarts of cream were being produced in Boylston.[11]  The tide was turning from an agricultural farming town to one where a livelihood was often made elsewhere.

Butter has always been “ubiquitous in the world’s most fabulous cuisines…”[12] Containing up to “80% butterfat it is solid when chilled and at room temperature.”[13]  Butter is most commonly made, and some would say preferred, from cows’ milk, but it could be made from the yak, sheep or goat, all animals of tamed beasts by our ancestors.  It was popular and nutritious among peasants as a cheap source of nourishment and prized by nobility for the richness it added to cooked meats and vegetables.  Because it was considered an especially delicious fat, European Christians were asked to make do without their favorite fat during Lent until the 1600s.[14]

The word butter may h 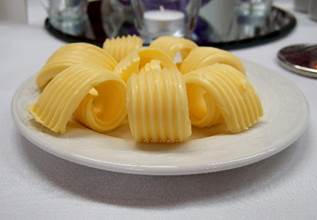 ave originated from the Greek word for cow cheese, ‘boutyron.’  Other sources say it is from the language of cattle-herding Scythians.[15]  Whatever the source, foods containing this delicious butter fat are deemed rich in taste and found in all of the best pastries and foods of all kinds. Check out our dazey glass paddle churn when next you visit our museum.

[11] The Massachusetts Census of Fisheries, Commerce, and Agriculture, 1905