Girl Scouting in Boylston began in 1922, only ten years after Juliette Gordon Low introduced Girl Guiding in 1912 into the United States.  Juliette was born in Georgia, but married William Low and while they lived in England and Scotland she met and was influenced by Lord Robert Baden-Powell and his sister Agnes. There she learned how Lord Powell prepared the boys to enjoy living in the out-of-doors, something he discovered they were unprepared to do while he was leading soldiers.  Lord Powell’s sister could see that it would also interest the girls and she became the first president of Girl Guides in Great Britain.  Mrs. Low found the concept fascinating and became a leader of a Guide company in a small village in Scotland. The activities were so exciting to her she couldn’t wait to start a group upon her return home to Georgia.  In 1913, the name was changed to Girl Scouts and their handbook was called How Girls Can Help Their Country.  Mrs. Low travelled all over the United States spreading the message of the Girl Scouts, and by the end of 1918 there were 34,081 members.[1]

In Maude Keck’s Early History of Girl Scouting in Boylston, Massachusetts she writes

“I believe the New England Mandate was the first region of troops to be organized, after the founding of the first troop by Juliette Low.”[2]

The very first Boylston Troop #1 was registered on February 10, 1922 under Captain Ruth Boyden, who held that leadership until 1930 when ill health forced her to slow down.  She passed the mantle to an assistant, Maude Keck.  When Miss Boyden passed away in 1931, all her scouts honored her by attending the services in uniform, and a bronze marker with the Girl Scouts emblem was placed on her grave in Pine Grove Cemetery.

Troop #1 first met in the First Congregational Church of Boylston, but when meetings conflicted with church needs, they met at The Men’s Club, The Town House.  It bec 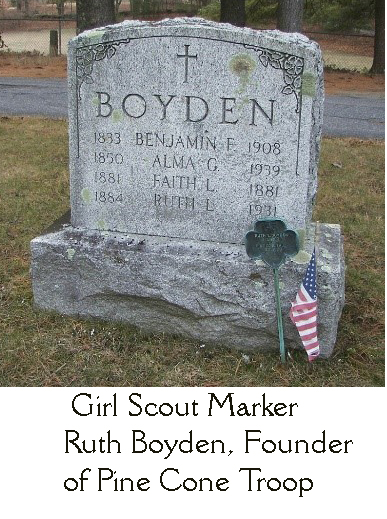 ame obvious as a second troop formed in 1930 in Morningdale, when the two troops combined bringing the total numbers to 48, that a place of their own would be welcome; thus in 1933 a meeting house was built on some Keck property off Temple Street.  It was dedicated on May 25, 1933 and named “Pine Cone Lodge”.  The building of the lodge was truly a community project.  Men donated their time to erect the lodge, women and girls sold baked goods to help pay for lumber and furnishings, local groups such as Harry Souci’s “Revues” dedicated some of the proceeds from the shows to the scouts for their new home.  The lodge became so successful that it was occasionally rented to groups from other towns.  All monies helped with upkeep, their needs, and even provided some treasury savings for their camping activities.

One interesting note was that when the scouts were first making plans to build, they needed some immediate cash to begin.  They didn’t have it, so they approached Mr. Sumner Barton, a wealthy Boylston gentleman who loaned it to them.  The scouts paid it back in small amounts each time their fundraisers had earned some they could spare.  Mr. Barton related to Mrs. Keck at the time the loan was paid off in 1936, he believed that “we were the only organization to pay him back in full. “[3]  He helped them more than once, becoming one of their champions who clearly became impressed with their leadership and responsibility.

The Pine Cone Lodge served them well for nine years, until a neighbor of the lodge who was burning rubbish let the fire get away from him.  It jumped to the building and burned it down to the ground in 1942.  What a sad day.  Ruth Donaldson Coyle remembered the building of the house and its sad demise in her oral history.  She recalls “our fathers built the building.  It was a big meeting place and it had a little kitchen off of one side.  We used to have overnights down there and everything was there for us.”” Ruth was a scout for thirteen years.[4]  Her sister Marion’s uniform was donated and in our collection.

Leadership and responsibility that so impressed Mr. Barton was an integral part of The Girl Scout Promise and the Boylston girls lived by their motto:

On my Honor, I will Try;

To do my duty to God and my country,

To help other people at all times,

To obey the Girl Scout Laws.

The laws involved trust, loyalty, helping others, courtesy, kindness to animals, to be a cheerful good sister to all, thrifty and clean in thought, word, and deed.   The symbol was and still is a Trefoil which symbolizes the “blue sky is over us all, the gold stands for the sun which shines on us all, the stars in the leaves of the trefoil remind us of our Promise and Laws.”[5] 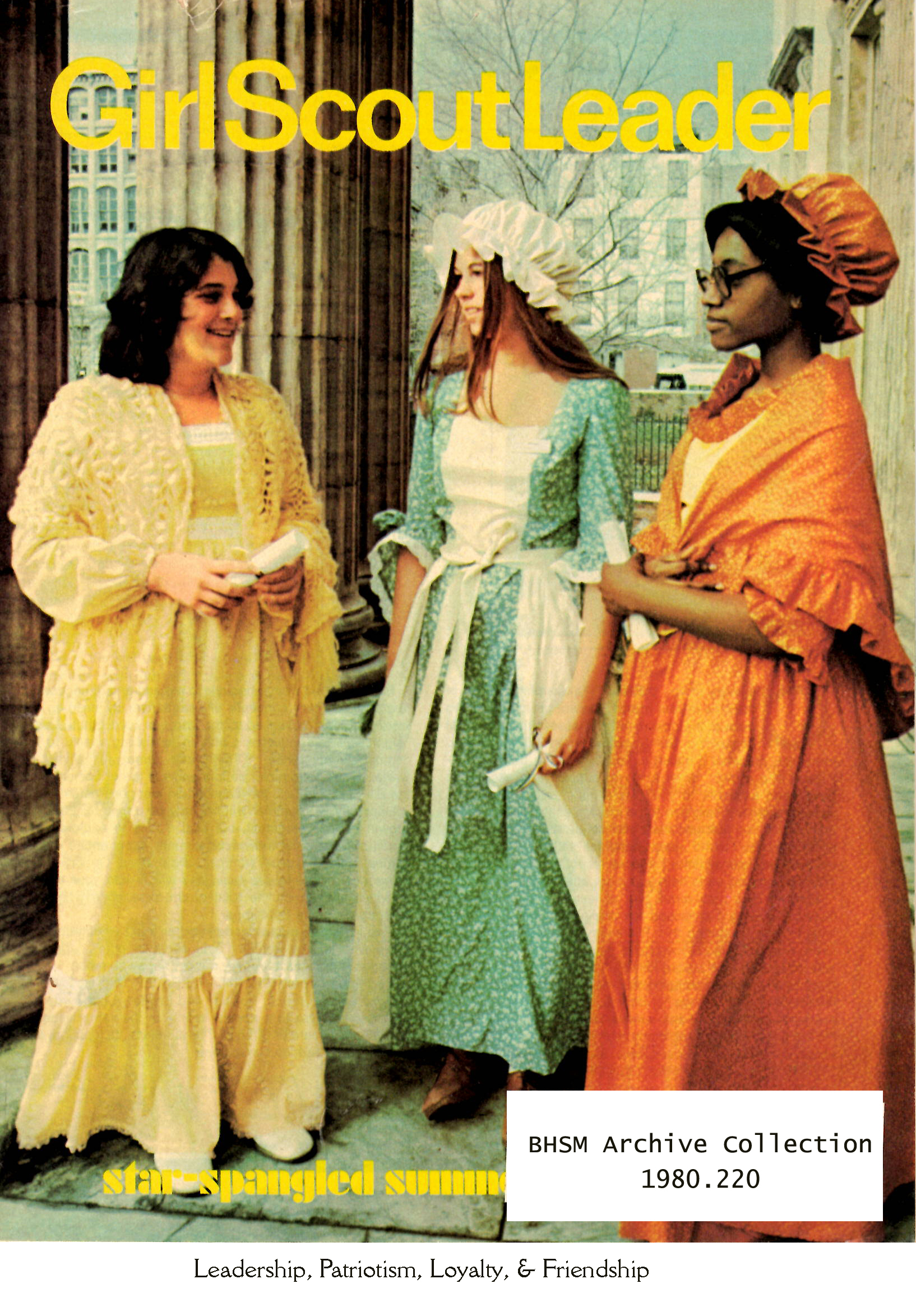 The Girl Scouts in Boylston, just as the originators had planned, made camping and learning how to live in the out of doors an important part of their activities. They learned valuable skills while having fun: survival skills, to appreciate nature, to be self-reliant, and how to apply emergency first aid.  Camping provided opportunities for the older girls to help, teach, and oversee the younger girls; thus, learning leadership and responsibility.  Chores were shared.  Scouts realized how much fun they could have out of doors with swimming, boating, crafts making, creating plays and having sing-a-longs; doing all this while creating friendships and memories they would cherish always.

Camping trips were annual whenever that was possible with one which notably stands out.  The year was 1940 or 1941 when the Girl Scouts rented YWCA Camp Mayanuk, for two weeks at Fort Pond in Lancaster, Massachusetts. It was so well run under Mrs. Keck’s leadership that while she was attending a conference at a later date, she overheard a woman from New York announce that Boylston’s Camp Mayanuk had been voted “the best troop camp in the United States by the National Committee.” [6]  She had no idea in advance.  That explained one instance at the camp when a regional Girl Scout administrator visited the camp and was asking the girls somewhat secretively, “Do you get enough to eat?  Are you enjoying yourselves?  What kinds of activities do you do here” etc.  Apparently visits to camps across the U.S. had led the National Office to believe the Boylston camp experience was “the best.”  What a wonderful accolade.

Another special event of that summer, as told by Mrs. Keck, was “This year [1940 or 41] we had quite a new innovation in that Mr. George L. Wright, our elderly Town Historian went to the camp with us.”  The girls would gather around him as he told them stories about old Boylston.  They learned more of the local history and always looked forward to hearing him tell of the old days.

Girl Scouting whose aim is to help each girl become a happy, confident member of her troop, home, school, religion, community, country, and the world-at-large has been well attended in Boylston throughout the years.  Today scouts still serve the community of Boylston.  In June 2020, three members of Boylston’s Troop #11388, Erika Lavalee, Elise Poretsky, and Elizabeth Prochazka, earned the Girl Scout Silver Award for their successful “Lending Library for Hope Lives Here” project. The award recognition is one of the highest achievements in scouting.  This team researched books that would benefit families in their time of grieving.  And through their fundraising efforts, purchased the books and set up a lending library for families in need of support.   This is certainly a true demonstration of leadership, compassion, team as well as community spirit.  Congratulations to our leaders and scouts for striving to make Boylston a great community in which to live.